Could a headset that delivers transcranial direct-current stimulation be the next big thing in treating depression? 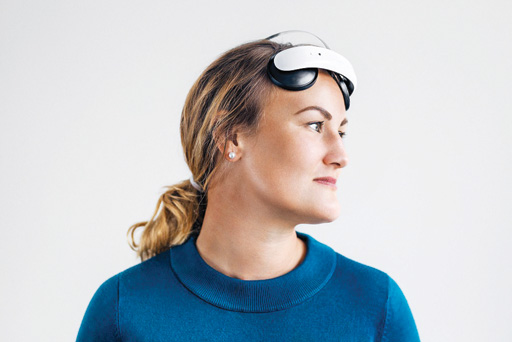 Pharmacists dispensed most of the 70.9 million prescriptions for antidepressants issued during 2018, according to NHS Digital. However, many of these were probably ineffective.

Only 36.8 per cent of patients with depression entered remission with their first antidepressant, according to the STAR*D study, while a third didnâ€™t respond even after four antidepressants.1 And just 50.8 per cent of those who completed an Improving Access to Psychological Therapies course in 2017-18 recovered. Clearly, there is a real need for new treatments.

The company is starting talks with the NHS to have the headset available on prescription but, in the meantime, it retails at Â£399. The virtual therapy app, available on iOS, is free.

Flow this month received $1.5m investment from Khosla Ventures which it will use to support its European rollout and fund clinical studies.

During tDCS, electrodes placed on the scalp deliver a weak electrical current that alters the activity and excitability of the cerebral cortex. Different cortical regions control various aspects of our everyday life.

Rumination is one of the most distressing and invasive features of depression and anxiety. Patients chew the mental cud repeatedly, recalling distressing events or their feelings about their lack of self-worth, inadequacy and self-loathing.

Transcranial DCS seems to offer some relief from depressionâ€™s incessant and intrusive impact on daily life, according to a meta-analysis of six randomised trials involving 289 patients.2 Active tDCS more than doubled (odds ratio [OR] 2.44) the likelihood that patients would show at least a 50 per cent improvement from baseline in their depression scores compared with sham treatment (34 and 19 per cent respectively).

Active tDCS also more than doubled (OR 2.38) the likelihood that patients would enter remission compared with sham treatment (23.1 and 12.7 per cent respectively). The numbers needed to treat (NNT; 7 and 9 respectively) are similar to those for the response rates reported by a Cochrane meta-analysis for antidepressants. According to the meta-analysis, the NNTs for response were 7 for selective serotonin reuptake inhibitors (SSRIs) and 9 for tricyclic antidepressants.

The tDCS regimen involved 30-minute sessions for 15 consecutive weekdays, followed by seven-weekly treatments. The mean decrease in the Hamilton Depression Rating Scale score from baseline was 11.3 points with escitalopram, 9.0 points with tDCS and 5.8 points with placebo. Both escitalopram and tDCS were significantly more effective than placebo.

Transcranial DCS was not non-inferior to escitalopram. The results may not, however, apply to other antidepressants or different tDCS protocols.

â€œThese and other studies suggest that tDCS is effective for depression, offering about the same benefit as SSRIs,â€ MÃ¥nsson says. â€œAs with many other treatments, the exact efficacy will be discussed among researchers and further examined in clinical studies.â€

The adverse events of pharmacological antidepressants are well known. Although larger trials with longer follow-up are needed to fully characterise
the risks and benefits, tDCSâ€™s adverse events include skin redness, tinnitus and nervousness. In the comparison with escitalopram, two of the 94 patients using tDCS developed new-onset mania. (In rare cases treatment-emergent mania can also develop in people taking certain pharmacological antidepressants.)

In the meta-analysis, the drop-out rate was not significantly different between the active and sham groups (10.1 and 12.2 per cent respectively).

â€œThe studies show that tDCS is safe and convenient, broadly as effective as the most frequentlyÂ used SSRIs and can be combined with other treatments. Patients with depression need new treatments. We hope that our tDCS and behavioural training app will go some way to meeting this need.â€