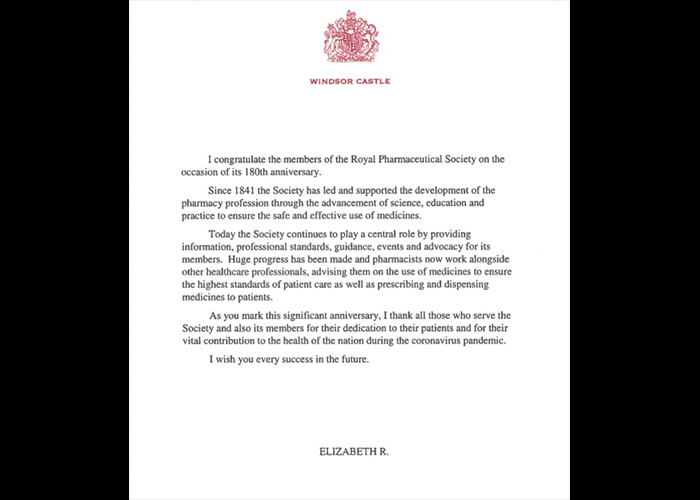 The Queen has written to the Royal Pharmaceutical Society to congratulate its members on the 180th anniversary of the organisation.

The RPS revealed today that Queen Elizabeth had written to it in advance of its 180th anniversary on April 15, but that it had deferred its celebrations until May out of respect for the death of the Duke of Edinburgh on April 9.

In her letter, the Queen said: “Since 1841 the Society has led and supported the development of the pharmacy profession through the advancement of science, education and practice to ensure the safe and effective use of medicines.

“Today the Society continues to play a central role by providing information, professional standards, guidance, events and advocacy for its members. Huge progress has been made and pharmacists now work alongside other healthcare professionals, advising them on the use of medicines to ensure the highest standards of patient care as well as prescribing and dispensing medicines to patients.

“As you mark this significant anniversary, I thank all those who serve the Society and also its members for their dedication to their patients and for their vital contribution to the health of the nation during the coronavirus pandemic.”

RPS president Sandra Gidley commented: “This is a very special year for the Royal Pharmaceutical Society.

“I’m enormously proud to be president as RPS marks its 180th anniversary. From our early beginnings to the development of a modern profession, RPS has been the home of pharmacy.

“Today we celebrate 180 years of supporting pharmacists to improve care for patients and are delighted to have received a letter of congratulations from our Patron, Her Majesty the Queen, to mark the occasion.

“I’m particularly pleased that Her Majesty has commended the role pharmacists have played during the pandemic.

“We are very proud of our rich heritage and will take the best of this forward into the future, striving at all times to put pharmacy at the forefront of healthcare.”